You see your dentist regularly for a checkup and cleaning. Maybe you’ve had a cavity filled, or maybe several. That kind of dental work is commonplace. But when your childhood fillings begin to deteriorate, or you bite into that delicious Brazil nut and chip off a bit of your front tooth, a filling won’t solve the problem. Now, you need a dental crown and that’s a whole different game: at least two dental visits, maybe more, and an annoying wait for the real thing…but stop! Rewind! There’s a new crown in town – a CEREC crown – and you can get one in a single visit. Really.

What is a CEREC Crown? 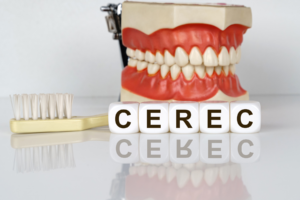 A CEREC crown is a crown that relies on today’s computer technology to do what it takes a dental lab a few weeks and at least two dental visits to do. The term CEREC stands for Chairside Economic Restoration of Esthetic Ceramics. That’s a mouthful. And all it really means is that here at Stiles Dental Care, we can repair a damaged or lost tooth with a natural-looking crown in just one dental appointment. That’s why a CEREC crown is often called a same-day crown.

Free of any metal components, a CEREC crown is fashioned of high-grade ceramics and is generally stronger and more natural-looking than a traditional crown. Plus, the entire process can be completed right in our office. In one appointment. Yes. One.

How is a CEREC Crown Made?
The process of creating a CEREC crown follows the same steps as the process of creating a traditional crown. The difference is that a CEREC crown relies on computer-aided design (CAD) and computer-aided manufacturing (CAM), rather than a molded model, a temporary filling, and a dental lab, to produce a durable, long-lasting crown that looks and feels like your natural teeth.

To create a CEREC crown we use a specialized intraoral camera that’s about the size of a ballpoint pen tip to take 3D images of the damaged tooth. Yes, the camera needs to go into your mouth, but because of its small size, it won’t be uncomfortable. And it’ll be in and out in a matter of minutes. These photos are then loaded into the CAD/CAM software which generates a digital restoration. We then review the restoration and edit it to mimic the exact shape of the damaged tooth, including all of the pits, ridges, and fissures that are uniquely yours. The final step is for a specialized milling machine, guided by the CAD restoration, to carve a crown from a solid ceramic block (CAM).

When the ceramic crown is ready, we polish it, color it to a shade as close as possible to that of your own teeth, and glue it in place with non-toxic dental cement. It sounds like a long process, but the truth is that from taking the first photo to gluing the crown in place can take as few as two hours.

A broken, damaged, or decayed tooth can affect how you sound when you talk, how you eat, and what your smile looks like. A CEREC crown restores the full function of such a tooth in a matter of hours, while a traditional crown can take weeks.

Is a CEREC Crown as Safe and Sturdy as a Traditional Crown?
Yes, it is. Over the 30+ years that dentists have been providing CEREC crowns, they have proven to be as sturdy and durable as crowns from other materials. If you practice good oral hygiene, a CEREC crown should last 10 to 15 years, or longer. And there are several advantages to a CEREC crown.

What About Cost?
The final cost to you of a CEREC crown will be predicated on the size of the crown needed and your dental insurance. However, all things considered, the fact that you will only need one office visit and no dental lab costs are involved, means that same-day CEREC crowns are usually no more expensive than a traditional crown.

Broken, lost, or otherwise damaged teeth are not to be wished for. But if they happen, contact us for a consultation. We’ll be happy to help you understand your options and decide on the best solution for your teeth.